Service, leadership, research acumen and, of course, academics are the hallmarks of the four students who have been chosen as Barrett, The Honors College’s Outstanding Graduates from the spring 2021 Arizona State University graduating class.

“These outstanding graduates represent the greatness of all Barrett Honors College students. In addition to being scholars, they embody the excellence, community spirit and service that is so integral to honors college students’ experiences,” said Mark Jacobs, Barrett, The Honors College dean and ASU vice provost. 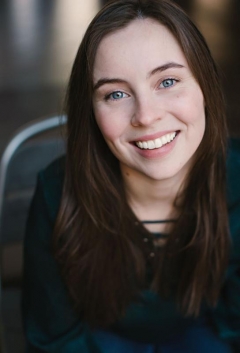 She is an extraordinary talent in theater and film, taking part as the lead or in major roles in eight theater and six film productions, composing the score for two of the films and co-producing and directing the plays in the Climate Change Theatre Action Festival at the ASU Herberger Institute for Design and the Arts in the summer of 2019 and envisioned while the Embedded Artist for the Environmental Health Engineering Lab at the ASU Biodesign Institute.

Anderies has taught ballet at the Adams Ballet Academy and the Phoenix Center for the Arts, interned for or been the featured artist at the Southwest Shakespeare Company and ASU Gammage. She has won both the Rosenzweig and Herberger Theatre Scholarships at ASU and the Special Talent Award. She also was the recipient of the Arizoni Best Actress Award.

She has also been a junior fellow at the School of Politics and Global Studies and a visual communications intern at the city of Tempe Office of Sustainability. She was nominated by the entire theater performance faculty. They called her “one of the most talented, intelligent and motivated students they have seen in many years.” 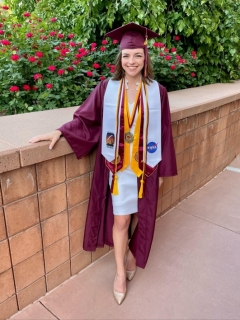 She has five research publications: two first-author manuscripts and three co-authored manuscripts. She has won two prestigious national scholarships, a Goldwater and a DAAD RISE.

Hocken has twice won a NASA Space Grant Scholarship. She also won a Fulton Undergraduate Research Initiative award and is the Outstanding Graduate in Chemical Engineering this year. She has had nine conference presentations and been a polymer chemistry intern at the Hughes Research Laboratory in California. She also has been a community assistant at Barrett and worked for three years each as a member of the Society of Women Engineers and Engineers Without Borders. Her nominating professor said “she is the best researcher I have worked with in my career.” 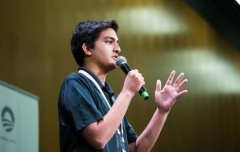 Bhat is a Tillman Scholar, serves as a director in the Next Generation Service Corps, is a tutor in the Barrett Page Turners club to help K–6 students improve their reading comprehension and speaking skills, and is on the service committee of ASU Changemaker Central. He is a business ambassador and a residential engagement leader in the W. P. Carey School of Business, and is the director of curriculum at the Refugee Integration, Stability and Education (RISE) program. In addition, he is the vice chief justice of the Undergraduate Student Government Supreme Court, the managing editor of Hybris and a writing tutor at Barrett. He was the education policy chair of the Yassamin Ansari for Phoenix campaign. His honors thesis work involved experiencing virtually every stage of creating an album — he wrote eight tunes for his jazz ensemble, learned recording and editing techniques, and facilitated collaboration with his peers within the restrictions set by the pandemic.

He has written ten scholarly pieces about music theory and clarinet practice and pedagogy. His recitals have been incredibly imaginative, including advanced repertoire spanning diverse genres. In his senior recital he performed a transcription of a work by bluegrass fiddler Stuart Duncan, contemporary solo clarinet works by Joan Tower and Eric Mandat, and an homage to the late Chick Corea with his jazz combo, among other works.

Arora has served on several committees within the School of Music, Dance and Theatre, including the Student Advisory and Diversity and Inclusion committees. His nominating professor said, “Vashawn has been an inspiring and creative force in the ASU clarinet studio.”