“We don’t talk about Bruno” — but we humbly brag about our alumni, especially those who work on Academy Award-nominated films.

By now, you’ve likely heard about Disney's animated feature film "Encanto." It’s about the Madrigals, an extraordinary family living in Encanto, a hidden place in the mountains of Colombia. Each family member is blessed with a unique gift — except for Mirabel, who is forced to use her ordinary gifts to save Encanto.

Since its blockbuster release last November, "Encanto" has won the hearts of millions and was nominated for best animated feature film, best original score and best original song at the Oscars.

Arizona State University alum Angel Ruvalcaba worked on the film as a production assistant with Walt Disney Animation Studios. It’s a role that he calls “nontraditional” in the film industry.

The Southern California native comes from a large Hispanic family with many siblings and cousins. He speaks fondly of his mother, who raised him as a single parent, and remembers her always telling him that he'd one day work in film or storytelling. Ruvalcaba first studied digital art at Mesa Community College and went on to ASU, where he studied filmmaking practices with an emphasis on screenwriting.

Ruvalcaba graduated with a degree in filmmaking practices from the Herberger Institute for Design and the Arts in the fall of 2019.

I see so much of my family in the Madrigals, and as excited as I was for the world to see 'Encanto,' I was so proud to show it to my family.

ASU News spoke with Ruvalcaba to understand his journey from ASU to working on this past year’s biggest animated film, and the impactful themes of the story. 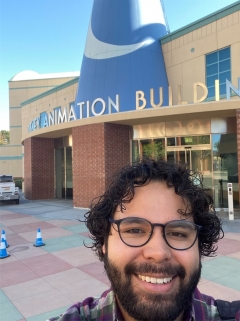 Question: Tell me about your path from ASU to Disney and your role in the production of “Encanto.”

Answer: When I graduated from ASU, I began my search for a job in the industry. I love art and filmmaking, and animation combines both of those mediums, so I focused my career search on animation. I spent many years as a manager at Harkins Theatres and honed ... skills such as management, organization and coordination. What I didn’t realize was that all of those skills are transferable to a production role. I spent a lot of time networking and learning more about production until eventually, I received the opportunity to become a production assistant at Walt Disney Animation Studios, working on the hit film “Encanto.”

Q: You’ve talked about production being a “nontraditional” film career. What lead you onto this specific career path?

A: When people think of filmmaking, they see Steven Spielberg sitting in his director's chair saying “cut” to a massive crew. But behind every great director is a great producer, and behind every great FX supervisor is a great production supervisor. I strongly believe production is the glue of the film. With that said, it’s not much of a creative role, but you’re managing the creative teams.

Production is a role that requires you to be able to speak to large groups of people, manage multiple tasks and not be afraid to ask questions. If you have great organizational skills and love to keep a room chatting, then production may be right for you. As much as it is social, it’s a very administrative role that requires you to keep track of multiple things at once. I always advocate for people to learn more about production; there’s more to it than most people think.

Q: What does a typical day look like for someone working on a Disney animated film?

A: That’s a great question because there really isn’t a “typical day” here at Disney. As a PA, I make sure to maintain the calendar for the entire department, which could include up to 60 artists! I check emails, follow up with artists and make sure all due dates are up to date. I run meetings with directors, producers and artists for creative reviews or I take notes in these meetings. It’s all very exciting stuff, and I’m so lucky and happy to have such a great job. Currently, I’m casually going back into the animation building located in Burbank, and it is a dream come true. 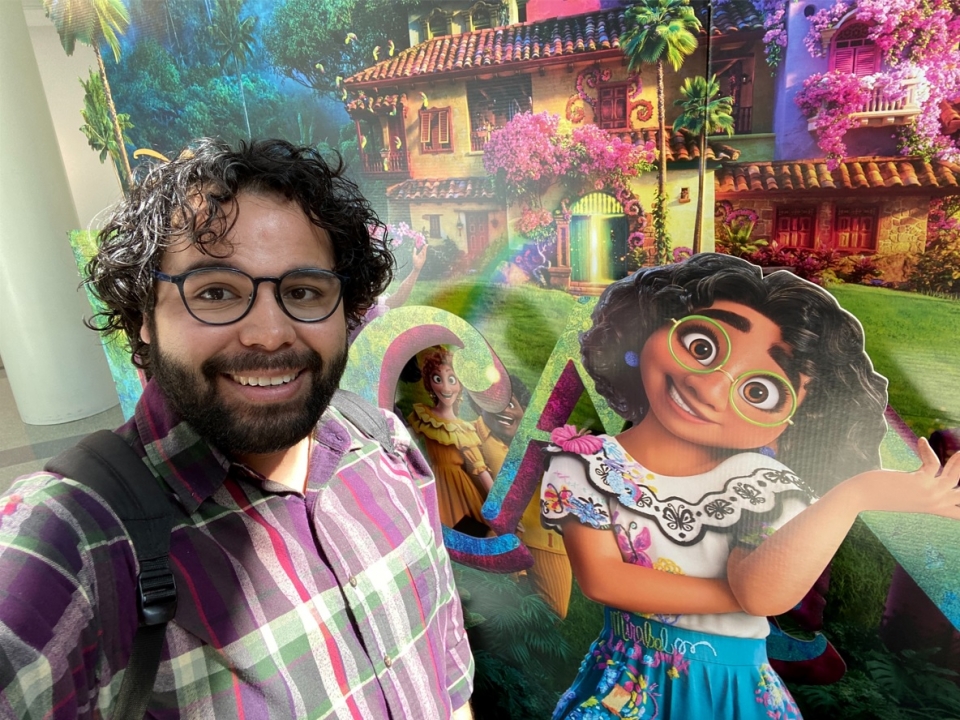 Q: Why was this film particularly impactful for you?

A: I come from a large family, so as soon as I found out I was working on “Encanto,” I was beyond thrilled. I see so much of my family in the Madrigals, and as excited as I was for the world to see “Encanto,” I was so proud to show it to my family. On the Thursday of release, I went to watch it with nearly 30 family members, and it was surreal to see them together because of me. The hard work and passion put into “Encanto” represents families like mine, whose No. 1 priority is each other. I was only a small part of the film, but I owe everything I did on it to my mother, my siblings, my grandparents, my fiancee and my entire family.

You never know if you’ll get that break when it comes to working in entertainment; it’s a scary industry. I was the first person to graduate high school and college in my family, so the pressure was on. I worked hard so I could pay them back for the sacrifices that they made for me. Me encanto mi familia.

Q: What advice do you have for current Sun Devils interested in a similar career path?

A: Keep pushing yourself. I know everyone says it, but it’s true: No one’s going to give it to you — you have to earn it. When I was looking for new opportunities, it was my full-time job. I woke up, got my coffee, went straight to the computer and went to work! I had an Excel sheet of all the jobs I had applied for, their status and who I had reached out to. This brings me to the most important tip in the production world: You have to network. LinkedIn is your best friend. And I recommend finding someone in the position you want to learn more about, and ask them to meet for coffee. Always make it very clear that you’re interested in learning more about this profession, and avoid coming on too strong and asking for a job right away. Build friendships that are more than jobs and things will start to come your way.

Reach out to groups interested in similar areas. This is more specific to animation, but there are so many amazing groups dedicated to connecting people, such as LatinX in Animation, Black N' Animated, Rise Up Animation and so many more. These are people who have similar interests and want to work in the same profession as you. Make them your best friends and your best allies. Reach out and connect!