Sometimes fiction can illuminate a real-life topic better than nonfiction.

That's the reason Book Riot gave for including an Arizona State University alumna's novel about Ukraine as part of its list posted earlier this week of "Books for understanding Russia's invasion of Ukraine." Kalani Pickhart's lyrical "I Will Die in a Foreign Land," published this past October, was the only fiction entry on the list. 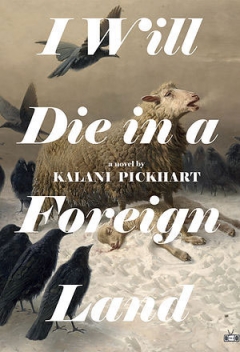 The novel takes place during the Euromaidan protests in Kyiv, which began in late 2013 and stretched into 2014, when hundreds of thousands of Ukrainians protested against then-President Viktor Yanukovych's decision not to sign a referendum with the European Union, choosing instead to build closer ties with Russia. The demonstrations and civil unrest would widen to encompass more rights and corruption issues. By the end of summer 2014, hundreds of civilians and dozens of police officers had been killed, Yanukovych fled the country, a new president was elected, Russia seized the parliament of Crimea, and Malaysian Airlines Flight 17 was shot down while flying over eastern Ukraine, killing all 298 aboard.

All of that is covered in a three-page timeline at the start of the book.

The rest of the novel follows more slowly and more personally the lives of four people whose paths intersect over the course of those protests and the months that followed — a Ukrainian-born doctor adopted by U.S. parents who returns to help at a makeshift medical clinic; a former KGB agent; a mining engineer whose life was forever altered by the Chernobyl meltdown; and a young activist who finds both love and grief.

The story dips in and out of their individual stories, interspering those chapters with lists of the dead, folk-song lamentations — based on the traditional kobzari, wandering Ukrainian bards — news reports and transcripts of cassette recordings. All the pieces add up to a novel that has garnered praise from a range of sources, from a starred review in Kirkus to a recommendation by a Washingon Post critic.

Pickhart has a number of ties to ASU: She finished her Master of Fine Arts with the Department of English in 2019. A first-generation college student, she also earned a bachelor's degree in English literature from ASU in 2009 and was a Barrett, The Honors College student. Now she works as a coordinator at The Design School, part of the Herberger Institute for Design and the Arts.

She spoke with ASU News about the inspiration behind her novel and how it came about.

Question: What first drew you to this nation and its history? What was your “aha” moment when you knew this was the story you wanted to tell? 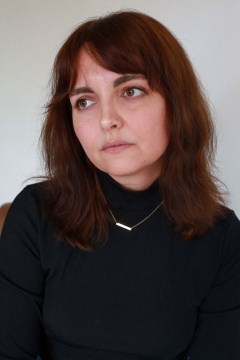 Answer: As many people around the world are now witnessing, Ukrainians are tough people. They aren’t mincing words or actions with the Russian president and invaders. I watched a documentary about the 2014 protests in Kyiv called "Winter on Fire: Ukraine’s Fight for Democracy," and I was simultaneously in my first semester in grad school, in a novel-writing course taught by Matt Bell. I was really moved by the story, and the sheer grit and fighting spirit Ukrainians have as a nation.

The moment I knew I wanted to write the book was the ringing of the bells at St. Michael’s Golden-Domed Monastery in Kyiv: The last time all the bells had been rung, it was during the invasion of Kyiv from the Mongols in AD 1240 in order to warn the people of the attack. I found it especially heavy that they were being rung in 2013 against their own police force. There was something there I couldn’t shake.

Q: What kind of research and travel went into writing this book?

A: A lot! Because I’m not Ukrainian, I felt an immense responsibility to tell the story compassionately and accurately — it also became clear very quickly that even though I was writing a story that took place in 2013–2014, there was a ton of history that led to that particular protest, so I was doing a lot of reading to try to understand the context of the moment. Meanwhile, we were reading about two novels a week at the time, so a lot of ideas on how to write the book came from a few choice authors, with the most obvious being Milan Kundera’s "Unbearable Lightness of Being." I was fortunate to have this confluence of both logistical research and artistic influence — it helped me get a quick, bare-bones draft at the end of my first semester of graduate school.

I went to Kyiv and Prague on research and language fellowships the summer of 2018: one from the Melikian Center’s Critical Languages Institute through the U.S. Department of State, and the other from the Virginia G. Piper Center for Creative Writing. I took eight intense weeks of Ukrainian — easily the most difficult courses I’ve ever taken — and immediately left for Europe afterward. At one time, my Ukrainian wasn’t too bad! But I have certainly, regrettably, lost a lot of it now.

Q: Your book begins with a timeline of the events that were part of the Euromaidan demonstrations and unrest in late 2013 and into 2014. Why did you decide to start a historical fiction book this way?

A: This was a conversation I had with my publisher, Two Dollar Radio. I had originally made a timeline when drafting the book but removed it when I was sending it out to publishers and agents. I owe a lot of credit to Eric and Eliza (Obenauf, the husband-and-wife team that runs Two Dollar Radio) for thinking critically about this book — we decided a general timeline and a map would be helpful for American readers, especially since there’s a lot of movement. The timeline helps provide some more straightforward context that the kobzari and journalists touch on here and there.

The map was something my dad wanted, actually. He told me after reading it that it could use one because he wanted to be able to have a simple frame of reference since he didn’t know anything about it. I’m glad we included it — he was right. It’s strange right now seeing maps of Ukraine every day, everywhere. I check one every day on the movement of Russian troops. It’s surreal and incredibly sad.

Q: The structure of the book — not strictly chronological, with chapters of the four main characters’ action interspersed with news reports, lists of the dead and the lamentations of the kobzari — is unusual, and quite lyrical. It forms a tapestry of the story, rather than a strict timeline such as you put at the start of the book. What were your goals/thoughts in structuring it this way?

A: So, I mentioned that as I was doing research on this particular protest, I quickly realized that I was uncovering a long, intense historical context. I felt that in order for a reader to understand why these protests were so important, it was critical to provide that context so they realized what was at stake. Practically speaking, I didn’t want to have the people in the book — Katya, Misha and Slava — bogged down with that responsibility. There was no way to do it without it feeling heavy-handed or awkward. The kobzari sections and articles help fill in that context in a way that felt more natural — this omniscient and third-person perspective that knows more than the perspective characters do.

Q: You weave the history and effects of Chernobyl into some of the characters’ stories. How important is it to include Chernobyl in any story of Ukraine?

A: Chernobyl is a word that I think most people recognize, so I wanted to be careful with it. I didn’t initially seek to include Chernobyl in the book because I was afraid it would be too much of a “kitchen sink” book with everything significant in Ukrainian history. Everything needed to be intentional.

When I was learned about the old generation of survivors who did not leave their homes despite the radiation, the samosely, things changed. The research for this book was really geared toward understanding the Ukrainian psyche as much as I could, and the particular fact about Pripyat’s samosley population organically reflected this protectiveness over home and the land of Ukraine that I was seeing pop up again and again through my studies. Ukrainians had been murdered by the millions because Stalin wanted their land, for example. There are a number of Ukrainian poems and laments from soldiers missing their villages while fighting for the Russian Empire — the significance of home and identifying as Ukrainian is profound.

The other reason I included Chernobyl was the fact of the negative influence of the USSR and the lasting effects of one of the largest environmental disasters in human history under ineffective and corrupt leadership. In 2013–14, Ukrainians were still trying to shake that Soviet influence and had been both literally and figuratively cleaning up for decades. You feel that significance in the novel even though it’s not blatantly stated.

There are many ways people can donate to help Ukrainians displaced and in need during the current conflict. Pickhart highlighted these groups:

Top photo: Protests in Kyiv, Ukraine, on Feb. 18, 2014, when Ukrainian police used tear gas, grenades and live and rubber ammunition on Euromaidan protesters in Independence Square, or Maidan Nezalezhnosti. More than 100 civilians and a dozen police officers were killed over the course of several days. Photo by Vadven/iStock